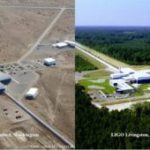 Join us Saturday, May 15, 2021, on The Wilderness Center’s YouTube channel for this year’s Astronomy Day, where we will host a live event to learn about the most mysterious objects in the universe – black holes.  A stellar lineup of speakers will explain what we know about black holes and the on-going research by the Laser Interferometer Gravitational-Wave Observatory (LIGO) Scientific Collaboration and the Event Horizon Telescope (EHT) collaboration to further our understanding.

Our first speaker is Dr. Patrick Durrell, Distinguished Professor in the Department of Physics and Astronomy and Director of the Ward Beecher Planetarium at Youngstown State University.  Dr. Durrell’s presentation is titled “Black Holes Both Big and Small.”  Dr. Durrell will highlight some of what we know about these strange objects, including stellar-mass black holes that come from stellar evolution, and the much larger supermassive black holes that reside in the centers of most galaxies.  He will also focus on how we find these different kinds of black holes.

Our second speaker is Dr. Keith Riles, H. Richard Crane Professor of Physics, at the University of Michigan.  Dr. Riles leads the Michigan Gravitational Wave Group and is a member of the LIGO Scientific Collaboration that made the September 2015 discovery of merging black holes.  The Michigan Group is an integral part of the LIGO Scientific collaboration.  The era of gravitational wave astronomy began with a bang on September 14, 2015 via the discovery of a massive binary black hole merger by the two LIGO detectors. Since that first detection, many more black hole mergers have been observed by LIGO and by its partner the VIRGO detector in Italy.  Dr. Riles’ presentation is titled, “Detecting Invisible Black Holes with Gravitational Waves.”   Dr. Riles will present groundbreaking discoveries learned from these detections and the prospects for future detections.

First ever recorded image of a black hole

Our third speaker is Dr. Angelo Ricarte, post-doctoral fellow at the Harvard-Smithsonian Center for Astrophysics and the Black Hole Initiative.  As a member of the EHT collaboration, he is an expert in making polarized images of plasma swirling around black holes.  Dr. Ricarte’s presentation is titled, “Imaging Black Holes with the Event Horizon Telescope.”  The EHT collaboration produced the first resolved image of the black hole at the center of galaxy M87.  Dr. Ricarte will discuss these EHT observations and what has been learned about the black hole’s accretion flow.  As there is more science yet to be done, he will discuss future steps – including ambitious ideas to extend the EHT by going into space.

Mark your calendars for May 15 and enjoy our speakers and activity kits with the whole family.